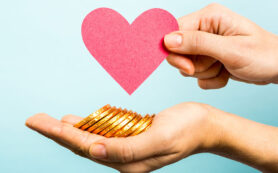 Posted in: College and University on:&nbspApril 24

If there’s one silver lining of the global pandemic, it’s the rise of charitable giving, especially in the U.S.

Despite a series of unforeseeable catastrophes, including a global pandemic, widespread unemployment, international social justice protests, and a turbulent presidential election, many Americans didn’t just stay sequestered in their homes away from the world’s problems. They decided to do something about it.

In March, Smile Train, the world’s largest cleft charity, released their first report examining how Americans used their time and money for charitable organizations in 2020. The conclusions are comforting.

Called “Caring Amid Crisis: How COVID-19 Influenced American Donations,” the report analyzed information from a survey on consumer donation habits before and during the COVID-19 pandemic. It used that information to conclude how 2020 changed Americans’ attitudes toward donating.

A significant finding from the survey shows that a whopping 91% of Americans said it’s more important to support charities and fundraising events now versus before the COVID-19 pandemic.

According to the report, about 41% of Americans said their donation patterns have increased, with another 31% stating that their giving amounts have also increased.

While charities focused on the environment and the arts still saw significant drops in donations last year, charitable organizations that focus on human services, like the YMCA and Salvation Army, saw substantial gains.

It also helps if the charity was already active on social media, which saw its own share of growth during a year defined by restrictions and quarantines.

A good example of this is WE Charity, which expanded its social media presence in 2020 at the same time it curtailed many of its operations.

One of the biggest charities in Canada, WE Charity has long been active on social media. But like many human service-based charities, WE Charity had to suspend many of its operations during 2020, yet continued to see increased online support.

The Smile Train report’s findings are echoed by other research as well. Though the coronavirus pandemic initially slowed down Americans’ charitable donations, by the end of 2020, money donated to charities surpassed totals from the previous year, according to research from The Blackbaud Institute, a research division of the Blackbaud cloud computing company that works with nonprofit organizations.

Overall, charitable giving rose 2% in 2020 compared to 2019, according to their report — a significant number given that charitable donations dropped 17% during the summer months that saw some of the most intense restrictions of the pandemic, especially in the US.

“The importance and resiliency of giving began to recover during the second half of 2020,” the report authors wrote. “It may not have felt like it, but giving recovered in many remarkable ways.”

For additional information about how Americans’ charitable giving changed in 2020, here are some other findings from the Smile Train report:

“To know that giving back to children not only continues to be a main charitable focus for Americans but that it has increased as a priority after a challenging year for all is extremely faith-restoring,” said Susannah Schaefer, Smile Train President & Chief Executive Officer.