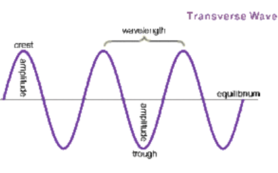 Posted in: College and University on:&nbspJune 26

We know there are many kinds of waves in nature like electromagnetic waves, surface waves, mechanical waves, light waves, sound waves, longitudinal waves, transverse waves and many more that are classified on various aspects.

A mechanical wave carries energy through a medium and needs initial energy input. Mechanical waves can be produced solely in media which features inertia as well as elasticity. Once the wave receives the initial energy it travels through the medium until its energy is transferred. In distinction, electromagnetic waves are the waves which do not require any medium but can still travel through one. Hence electromagnetic waves are different from mechanical waves.

There are three types of mechanical waves:

Surface waves are the waves which travel along the surface or interface between two media.

In transverse waves, the movement of the particle is perpendicular to the motion of the energy.

Consider a rope laid out horizontally in a room. When movement is introduced on the left edge of the rope, the energy moves from the left end to the right end of the rope. It creates a concurrent movement in the up and down pattern and is known as a transverse wave.

Propagation of the transverse wave is as shown in the figure below:

Examples of  transverse waves are:

Longitudinal waves are the type of wave in which the movement of the particle is parallel to the motion of the energy. This wave travels in a parallel pattern in the direction of particles in the waves (straight parallel above the particle). Consider a rope which is placed horizontally, if a pulse is applied on right and left ends, the energy is said to progress from both left and right ends of the rope grasping the changes in parallel motion and hence these are known as longitudinal waves.

Propagation of the longitudinal waves is as shown in the figure below:

Examples of longitudinal waves are: