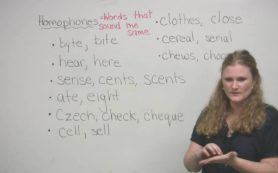 The Most Commonly Confused Words in English

English is a challenging language to learn. Even native speakers can be confused with some words that are pronounced the same. These words are called homophones, and there’s a lot of these in the English language. Most of the English speakers around the world have encountered other people that mixes homophones, especially in the social media where written communication is the most common medium of communication. Here are the commonly confused homophones used.

“Affect” and “effect” are the most commonly confused homophones in the English language, according to Grammarist. The two words are almost the same in spelling and in pronunciation. To avoid mixing up these two words, it is encouraged to practice the proper usage of these two words.

“Affect” is used in two ways, in which the first one is to indicate a change or difference. An example of this is the sentence “The lighting in the room can affect productivity”. The second use of this word is to move someone emotionally. An example of this usage is “The death of his mother affected his grades.”

“Effect”, on the other hand, can be used as a noun or a verb. When used as a noun, it is a result or a consequence of an action. An example of this is “The effect of cutting classes is having a poor grade.” When used as a verb, it means a cause to something that happens. An example of this usage is ” The harsh weather effected the cancellation of the classes.” This usage is not used frequently.

“Than” and “then” seems to be confused commonly because of the different pronunciation of the word “than”. Some people pronounce it as “dan” and others pronounce it as “den”. The two words are once considered the as the same inOld English. “Than” is used when the sentence is aiming to compare to things. An example of this is “You’ll get a faster response via calling than texting.” Then, on the other hand, is used to indicate the passage of time. An example in the usage of this word is “Meet me at the park, and then we’ll eat pizza.”

There, Their, and They’re

“There” is used in a lot of ways. It can be used to pertain a certain position (you’ll find the extra socks there), to attract the attention of someone (hey there!), and to indicate an existence of something (there’s extra money in the room). “Their” is used to pertain something owned by a group of people (the house with a green roof is their property). It is also used for titles such as “Their Majesties”.

“You’re” is a contraction of the words “you are”. Example usage of this word is “You’re gonna love this new recipe from my mom” and “You’re late. You’re not gonna make it.” “Your” on the other hand, is a pronoun and is used to associate ownership. An example of this is “Don’t leave your things unattended.”